Diving the Historic Helldiver in Maui

About once or twice a month, the Maui Diamond II treats its divers to a piece of history, the mostly intact plane that has been resting on the ocean floor since August 31, 1944! The craft sits in 50 feet of water, surrounded by sand, with only the tail fin broken off.

The aircraft, a Curtiss SB2C-1 Helldiver (often referred to by those who flew them as “the beast” or “Son-of-a-Bitch 2nd Class”), was ditched by its pilot, William E. Dill, and radioman Kenneth W. Jobe during a practice mission out of Pu’unene Airport. Both crew members were rescued, and obviously, the plane was never recovered. As an interesting side note, it is known that Lt. Dill had to ditch another Helldiver in the Gulf of Leyte in the Philippines just months after the one he ditched in Maui; that plane has not yet been rediscovered, but once again, both occupants survived.

Fast forward to January 2010, when the story goes that a couple of fishermen tipped off a local dive shop owner that while fishing, their prey kept disappearing “beneath the wings”! This led Brad Varney of B&B Scuba to rediscover the Helldiver and to be among the first to get to see her again. Another diver, Sean Dyer, dug right in and got busy sharing his photos and communicating with aviation buffs and coming to believe that Maui’s “newest wreck” was an SB2C Helldiver.

Our very own Captain Chris Quarre' (at the time, co-owner of North 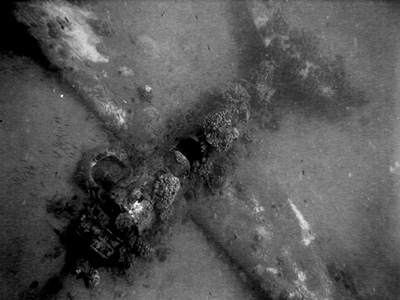 Shore Explorers) led subsequent teams of divers down, also with the intention of studying and documenting the bomber in hopes of identifying it. After careful research and observation, Chris also concluded that the plane was indeed a Helldiver, knowledge that was confirmed when he actually uncovered the numbers (18400) on the vertical stabilizer, enabling confirmation by naval records!

“I sat next to the tail (vertical stabilizer) in the sand and waved sand off of it, pausing periodically to see if I had uncovered anything. After about 15 minutes of this, I finally saw the word Navy! Then, I saw the BuNo number below it. It was an amazing feeling to know that I was now a part of and forever connected to this great part of history.”

Since then, Captain Chris (known to most of us at Captain Q) has had the pleasure of sharing this dive with others several times a year, always taking the time to share his knowledge of the bomber and to instill in his fellow divers the importance of appreciating it as a piece of history and of the ocean, as it hosts a lot of life these days. He also urges divers to be mindful of their impact and to respect this gift to us divers by leaving it as we’ve found it – intact!

Aside from providing game fish with shelter from fishermen, the Helldiver is home to schools of goatfish, a variety of nudibranches (including one of our favorites, the “gloomy”), eels, leaf scorpions, and lots of other living treasures. When we dive this site, we typically drop our divers off in small groups so that everyone can have a good look without crowding each other. While diving the bomber (yeah, pun intended), divers should pay particular attention to buoyancy control, as the bottom can be easily stirred up, and this wreck does have very fragile areas.

That said, we were somewhat heartbroken and, well, angry to notice in 2011 that some parts of this aircraft had gone missing. From Chris: “You will note that the picture of the gauges shows them and the cockpit pretty concealed in growth, algae, etc. Any of you who have dived this plane recently may notice that it doesn’t look anything like this anymore. This area has clearly been “scrubbed” and now several of the gauges have been removed.”

To anyone who has taken part in such activities, Chris asks, “What

the Helldiver is wrong with you people??! This beautiful piece of history went down in near perfect condition and lay nearly untouched for 66 years. And now we are lucky enough to get to experience it. But a few selfish and uncaring divers are giving the rest of us a bad name by slowly tearing it apart.” Chris urges his fellow divers to help spread the word and help us protect this amazing piece of history. This aircraft is protected by the 2004 Sunken Military Craft Act: “No person shall engage in or attempt to engage in any activity directed at a sunken military craft that disturbs, removes, or injures any sunken military craft…”

At the time of this posting, the NOAA Maritime Heritage Coordinator on Oahu is working to have a plaque and mooring ball installed at the site. In the meantime (and always), it’s like mom said; you look with your eyes, not with your hands!

To find out when you can go see this piece of history for yourself, you can bookmark the Diamond's Upcoming Events page or just give us a call!

My family and I have booked a cruise for June of 2016 and one of our scheduled stops is Maui. My wife knowing that it has been a dream of mine as long as I been diving to dive a WW2 wreck surprised me with a Maui Dreams Dive to see the Hell Diver wreck as a Christmas gift. It will make the top spot of all my dives. I say all this to strongly encourage all divers to respect & reverence the areas they dive so all divers my enjoy the experience of a dive site "unaltered" by human activity. Thank You in advance Maui Dreams for making one my dreams a reality.

Top of my list, for when I get a chance to return to Mauai!

I love this wreck! Each time I dive it I find something different there. Once I looked under one of the wings and saw hundreds of cone shell egg sacs attached to it!